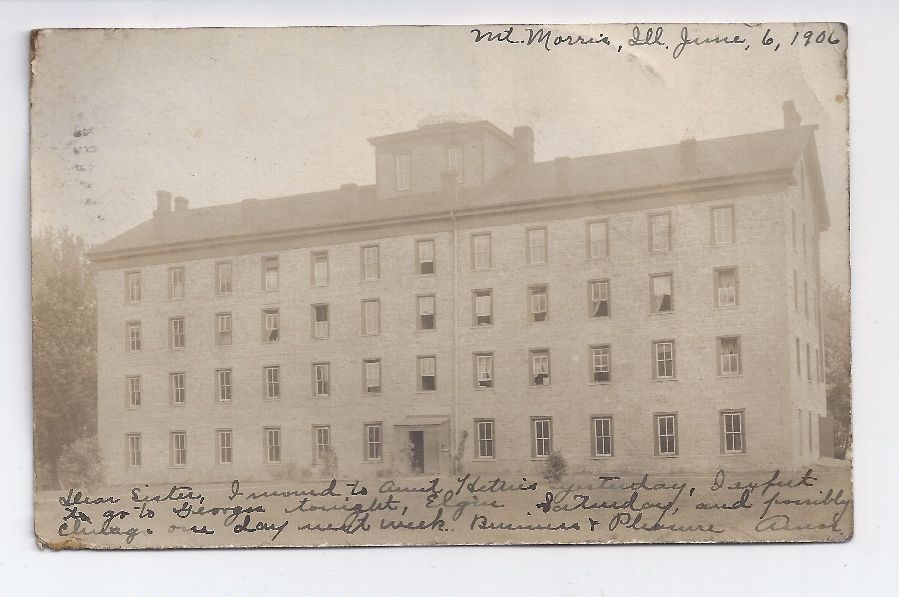 From Wikipedia, the free encyclopedia:

Mount Morris College was a religious college affiliated with the Church of the Brethren in Mount Morris, Illinois. The original institution at this location was Rock River Seminary, which was founded by the Methodist Church in 1839. The Methodists closed Rock River Seminary in 1878 and subsequently sold the seminary grounds and buildings to the Church of the Brethren. The Brethren reorganized the school and reopened it in 1879 as Mount Morris Seminary and Collegiate Institute. The institution officially became Mount Morris College in 1884.

Although the college initially attracted enough students to be successful, luck was never with it. Fire hit the campus in January 1912 and burned one of the college's main buildings to the ground. Diligent fundraising allowed the campus to continue, and a new building was constructed to replace what was lost. However, by the end of World War I enrollments began to decline, and financial problems continued to plague the college. Enrollments began to rise again in 1929-1930, but then disaster struck one more time. Another fire hit the campus in April 1932 and destroyed a dormitory and heavily damaged some classroom and administrative buildings. The financial strain of this second fire, coming during the worst years of the Great Depression was just too much. At the end of the school year in May 1932, Mount Morris College closed its doors forever.