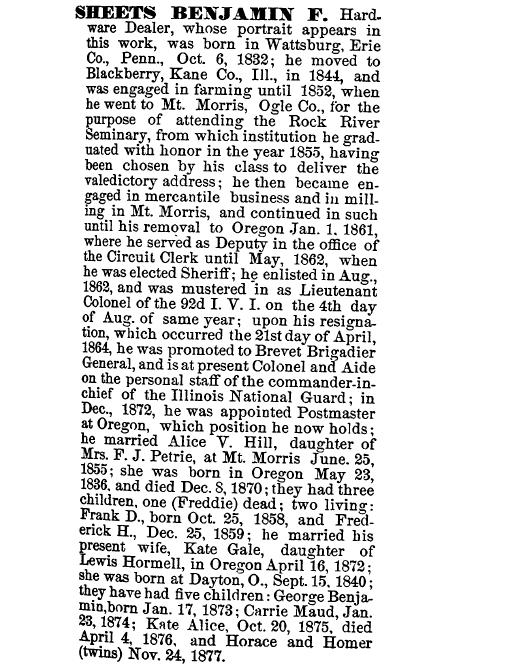 SHEETS, Benjamin Franklin, veteran of the Civil War, legislator, and former Superintendent of State Reformatory at Pontiac, now living in Oregon, Ill., was born in Wattsburg, Pa., October 6, 1832, the son of David Frederick and Lucy (McCumber) Sheets, the former born in Dansville, N.Y., December 18, 1802, and the latter in Wattsburg, Pa., January 1, 1809, the father's occupation being that of a farmer. In 1844, the subject of this sketch removed with his parents from his native State to Illinois, settling on a farm in Blackberry Township, Kane County, in June of that year. After spending his boyhood on a farm in Kane County, he received his academic education at Rock River Seminary, Mt. Morris, Ill., having as class and school-mates Senator Shelby M. Cullom, the late Congressman Robert R. Hitt, and a number of others, among the best known men of the State. His first employment after leaving college was as a dry-goods merchant, and, after marriage in 1855, he settled in Mt. Morris, whence he removed on January 1, 1861 to Oregon, Ill., where he became Deputy Circuit Clerk for Ogle County, and which has been his place of residence continously to the present time, except while in the army and otherwise officially employed. In May, 1862, Mr. Sheets was elected Sheriff of Ogle County, but on September 4, 1862, was mustered in as Lieutenant-Colonel of the Ninety-second Illinois Volunteer Infantry, afterward serving in General Thomas' Corps of the Army of the Cumberland, and receiving the rank of Brevet Brigadier-General for meritorious service in the field. Official positions held by General Sheets at a later period include those of Senator for the Ogle and Winnebago County District for one term (1886-90), and Superintendent for the Illinois State Reformatory, at Pontiac, 1891-93. It was while a member of the State Senate that he introduced and secured the passage of the act establishing the Illinois State Reformatory, located at Pontiac, Ill., of which, by appointment of the board of managers under Gov. Fifer, he became the first Superintendent. Col. Sheets has been a member of the Methodist Episcopal Church since 1846, served as a member of the Official Board forty-seven years, for thirty-one years was Superintendent of the Methodist Sunday School in Mt. Morris and later in Oregon, and for five times has been a lay delegate to the General Conference of the Methodist Episcopal Church, which meets once every four years. He has also been a member of the Oregon Grand Army Post No. 116, since the date of its organization, and has served as Commander of that Post several terms, as well as Delegate to State and National Encampments. In politics, originally a Whig, Col. Sheets has been a sturdy supporter of the principles of the Republican Party from its organization to the present time, and has voted for every Republican candidate for President since the candidacy of John C. Fremont in 1856. He takes a special pride in the fact that he was able to vote twice for the martyred Abraham Lincoln, and later for such successors as Gen. U.S. Grant, William McKinley and Theodore Roosevelt. During his long residence in Oregon, Col. Sheets has done a great deal in improving and beautifying the place of his adoption. Besides favoring and aiding efforts for general municipal advancement, he has built and embellished by the development of attractive grounds at different times, two fine dwellings for his own home, erected a commodious, substantial and handsome business building, and laid out and improved, with a number or pretty houses, Sheets' Addition to Oregon. Beyond being a promoter of its material growth, Oregon has always found Col. Sheets an active friend for every good word and work, having in view its moral welfare and intellectual progress. Col. Sheets has been twice married, first at Mt. Morris, Ill., June 25, 1855, to Alice V. Hill, who was born at Oregon, Ill., in 1837, and second, on April 16, 1872 at Oregon, Ill., to Catherine Hormell, who is a native of Dayton, Ohio, born Sept. 15, 1840, and there are two living sons by each marriage namely: Rev. Frank D. Sheets, born Oct. 25, 1858; Rev. Frederick H. Sheets, born Dec. 25, 1859; George Benjamin Sheets, born Jan. 17, 1873; and Dr. Horace Sheets, born Nov. 24, 1877. After a life of business and official activity and usefulness, Col. Sheets is spending the evening of his days in deserved ease and comfort, though still associated with one of his sons in the hardware business in Oregon, Ill.