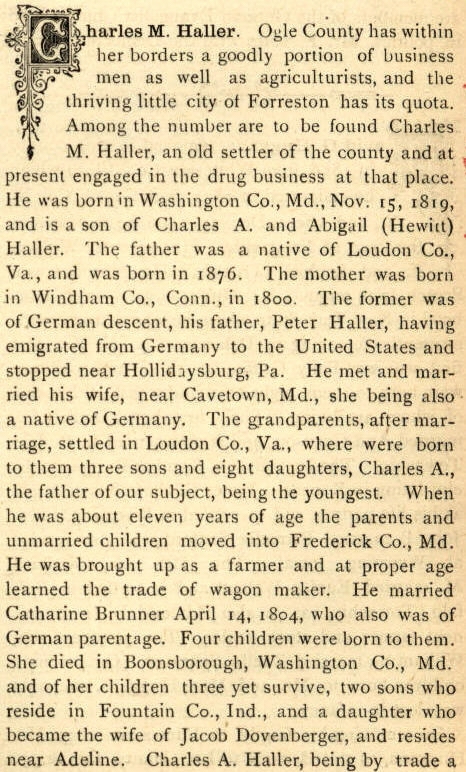 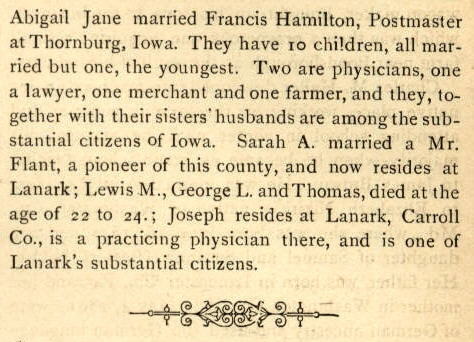 Charles M. Haller, an old and highly-esteemed citizen of Forreston, traces his ancestry back to colonial days. His maternal grandfather, Captain Meach, who was in command of a vessel, took part in the Revolutionary War. His daughter, Abigail Meach, married Robert Hewitt, who was of English and French ancestry, and also took part in the Revolutionary War, having many narrow escapes in several engagements. Robert Hewitt was a native of Connecticut, but with his wife and family he emigrated to Maryland in 1815. They were the parents of twelve children, of whom the mother of our subject was fifth in order of birth. He died in 1830, and his remains were buried at Middlebury, Franklin County, Pennsylvania. His wife survived him many years, and came with her family to Illinois in 1840. She lived to a ripe old age, dying in November, 1855, in her ninety-fourth year, having been born August 10, 1761. Her remains were interred in the Hewitt Cemetery, at Forreston. She used to cook for the Indians, and had many interesting stories to relate of her Revolutionary experiences.

The mother of our subject, Abigail (Hewitt) Haller, was the daughter of Robert and Abigail (Meach) Hewitt. She was born in 1800, at Tolland, Windham County, Connecticut. She was married in January, 1819, to Charles A. Haller, who, by his first wife, Catherine Bruner, daughter of John Bruner, a farmer of Frederick County, Maryland, had four children: John, a farmer, who lived and died in Attica, Indiana; Henry, a wagonmaker, who also died at Attica, Indiana; Katherine, wife of Jacob Dovenbarger, of Washington County, Maryland, but who came to Ogle County, and lived near Adeline; and Samuel, who lived and died at Attica, Indiana. To Charles A. and his wife seven children were born. Charles M. is the subject of this sketch. Jane Abigail married Francis Hamilton, of Maryland, who removed to Ogle County, Illinois, where he engaged in farming. He later removed to Keokuk, Iowa. Sarah Ann is the widow of Jacob Flaut. She resides in Lanark, Illinois. James Robert died when about eleven months old. Louis lived to be twenty-two years old, and died in Pine Creek Township, and was buried at Mt. Morris. George William, who had been a successful school teacher and insurance agent, died at Decatur, Illinois. Joseph is a physician engaged in practice at Lanark, Illinois. The mother of these children died at the home of her daughter, Sarah, at Lanark, Illinois, in 1882, and was buried in the cemetery at that place.

Charles Haller, the grandfather of our subject, came to America from Germany in colonial days, paying for his passage by his labor. He landed in Baltimore, and from there went to Washington, and later to Loudon County, Virginia, where Charles A. Haller, the father of our subject, was born. By occupation he was a farmer. He died and was buried at New Market, Maryland. When a young man, Charles A. Haller moved with his parents to Frederick County, Maryland, where he learned the wagon-maker's trade and conducted a shop. Later he moved to Boonsboro, Maryland, on the National Road. With his wife and four children, in May, 1846, he came to Ogle County, Illinois, and settled five and a half miles south of Mt. Morris, on the Grand Detour Road, where he purchased one hundred and twenty acres of land. He lived there, however, only six months, and died December 7, 1848, at the age of seventy years.

The subject of our sketch was born in Boonsboro, Washington County, Maryland, November 15, 1810 and there received his education in the subscription schools, in the meantime assisting his father in the cultivation of the thirty-three acre tract of land which he owned, and in the manufacture of brick, in which he was engaged. After attaining his majority, he aided his old school-master, James Brown, in the management of his school, which had an attendance of one hundred scholars, and engaged in their instruction.

In April, 1846, when twenty-seven years old, he was united in marriage with Miss Elizabeth Nikirk, daughter of Samuel Nikirk, a carpet weaver in the town of Boonsboro, Maryland, where she was born, educated, and grew to womanhood. The month after his marriage, in company with his parents and brothers and sisters, he brought his young bride to Ogle County. They left Boonsboro May 21, 1846, their household goods in a two-horse wagon, and a light wagon with accomodation for six persons, the younger children finding place in the wagon with the furniture. Their trip overland took just six weeks, and they arrived near Mt. Morris, their destination, July 3, 1846, and immediately set about erecting a house of four rooms, two stories high, the lumber for the construction of which our subject had to get in Chicago. He set out on Monday morning for Chicago and arrived home the following Monday. Those were the days of "ox team transportation", when the traveler cooked for himself along the roadside, slept in his wagon, and whistled a song along the lonesome roads to keep himself company.

Their little home erected, young Haller helped his mother and brothers the next year, but during the years 1847 and 1848 he took charge of a school at Phelps' Grove, and in 1848-9 taught the school on the Grand Detour Road, near Mt. Morris. In the fall of 1850 he moved to West Grove and settled on eighty acres of land given him by his uncle, George W. Hewitt. He built a frame house and set about improving the place, dividing his time, however, between school teaching and farming. He remained on that place until 1859, when he went to Forreston and engaged in general merchandising. Later he purchased a stock of drugs from Frank Barker, now of Rochelle, and a former resident of Forreston, and still conducts the establishment under the management of his son, E. E. Haller.

To Mr. and Mrs. Haller seven children were born. Samuel Henry died when seven years old. Susan married John Mullen, but is now deceased. Charles Louis died at the age of three years. Theodore F. is the editor and proprietor of the Forreston Herald. George Louis is now deceased. Charles M. is now living at Portland, Oregon. Edward Everett is in the drug business at Forreston. The mother of these children died December 23, 1893, at the age of sixty-five years, and her remains were interred in the Hewitt Cemetery at Forreston.

Mr. Haller sawed the log and split the stakes used in laying out the town of Forreston in 1855, the town being laid out on the land of his uncle, George W. Hewitt, who had located a claim of eight hundred acres. The first house built in the place was a rude frame structure built by the railroad company for a boarding house. Dr. Kingsbury was the first physician in Forreston. The first school teacher was Thomas J. Hewitt. Mr. Haller was selected as the first teacher, but having so much to do on his farm at the time, he secured the place for his cousin, Mr. Hewitt. The latter married Miss Fannie Rockwood, who was his assistant in the school. The first school building was just west of where the present school building now stands. It was a large frame structure and buildt under the supervison of George W. Hewitt at a cost of about two thousand dollars.

Mr. Caller cast his first vote at a special election in his native state, and his first presidential vote was cast in 1848 for Zachary Taylor, the Whig candidate. With the Whig Party he continued to act until the organization of the Republican Party, since which time he has given his support to the men and measures of that party. Religiously he is a Lutheran, and assisted in organizing the Lutheran Church in Forreston in 1858m and has since been an elder in the same. He aided and supervised the building of the church which was dedicated July 10, 1864. By the county court Mr. Haller was appointed Justice of The Peace, was then elected and served one year. He was later appointed Notary Public by the Governor and filled the position twenty years. He was also Township School Treasurer six years. All in all, Mr. Haller has led an active life. He is well known throughout the county, and all who know him esteem him for his many excellent qualities of head and heart.