Elizabeth Mary (Wessel) Runte was born at North Grove on October 20, 1861, and passed away on September 3, 1938. She attained the age of 76 years, 10 months, and 14 days. In March, 1877, she was confirmed in the North Grove Church by Rev. Biesemeier. She was married to Christ Runte at Rock Run, Ill., December 26, 1881. To this union six children were born, who all survive to mourn her loss. They are Mrs. Emma Fry, Forreston; Fred Runte, Florence Station; Mrs. Clara Finkboner, Rochelle; Oscar Runte, Forreston; Mrs. Elsie Griffin, Rockford; and Mrs. Esther Paddock, Beloit, Wis.

Eighteen grandchildren also survive. Her husband preceded her in death eighteen years ago. Deceased lived in this community all her life. While living in Forreston, before she was disabled by infirmities of age and sickness, she was an attendant at the services of the Reformed Church, from which church, after a short service at the DeGraff Funeral home, she was buried. Reverend Huenemann officiated. Interment was at the White Oak Cemetery.

Above from Forreston newspaper, September 8, 1938 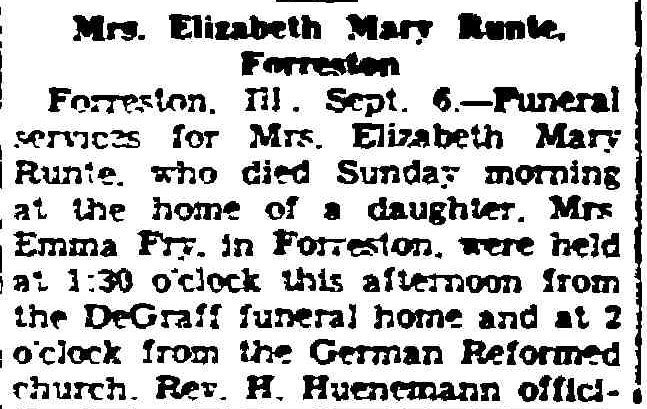 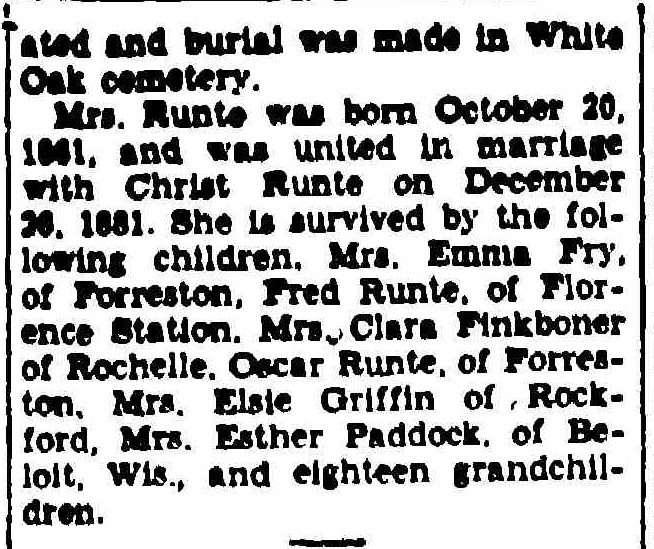