WIESEL, Gottfred, who carries on farming to a large extent in Pine Creek Township, Ogle County, Ill., besides having considerable land holdings in the West, is one of the most favorable known men in the southern part of the county. He was born November 14, 1844 in Hanover, Germany. His father and mother, Wilhelm and Henrietta M. (Park) Wiesel, Germans by nativity, emigrated to the United States in 1852, crossing the ocean in a sailing vessel, and being eight weeks and four days on the voyage. Landing in New York, they at once proceeded to Ogle County, Ill., and located in Grand Detour Township, where, being a blacksmith by trade, Wilhelm Wiesel obtained
employment in the plow works, continuing this connection nineteen years. Then he moved to Dixon, Ill., and worked nine years there for the Grand Detour Plow Company. After leaving Dixon, he made his home with his son Gottfred, until the time of his death, which occurred May 22, 1888, at the age of 77 years. The mother died in Dixon, Ill., April 2, 1871, when 44 years old. Gottfred Wiesel, who was the eldest of the family of ten children, was about 18 years old when he was brought to this country. He remained at home until he was 21 years old, and the next six years were spent in chopping wood in the winter and doing farm work in the summer months. When 27 years old he applied himself to farming on his own account, buying sixty acres of land in Mount Morris Township, Ogle County. There he lived until March, 1876, when he sold out and moved to Pine Creek Township, where he has since followed farming very successfully. He owns 386 acres of land in the last named township, and also has 1,120 acres in Nebraska and Colorado. Mr. Wiesel was married, in Oregon, Ill., September 20, 1873 to Dena Schulte, born in Hanover, Germany, July 2, 1852, and a daughter of Harm and Tebena (Buhr) Schulte. The family came to the United States in 1868, the father having preceeded the rest in 1867. At first they located in Maryland, but in a short time moved to Mount Morris Township, Ogle County, Ill., where Mr. Schulte died April 22, 1881. He and his wife had two children, Mrs. Wiesel being the oldest. The surviving children of Mr. and Mrs. Wiesel are as follows: Mary, who is the wife of Jacob Castle; Lana, who married Leslie Johnson; and Emma, who is at home. Two are deceased, namely: Tebena, who died in infancy, and William, who died in his 8th year. Mr. Wiesel is a Republican in politics, and has held several minor offices in Mount Morris and Pine Creek Townships. He and his wife are members of the United Brethren Church. 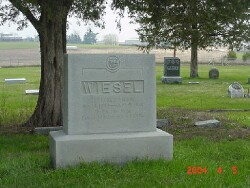