Henry Schelling was born near Cavetown, Washington Co., MD on December 6, 1837. Death came June 7, 1926 at his home in Leaf River, Ogle Co., IL. He was the son of Joaquim and Elizabeth Shafer Shilling. Mr. Schelling came to Ogle Co. with his brother Andrew in 1859. He was married to Miss Susan A. Henan of Lightsville on January 14, 1861. They have lived in Leaf River Township ever since.

In 1862 he united with the United Brethren Church of Lightsville. After the divison of the church he aided in building of the new church. His presence in the home, the church, and community will be greatly missed. Funeral services were conducted at the church last Tuesday by the pastor, Rev. S. E. Foltz and assisted by Rev. G. Hartz of Adeline.

The singers were Rev. S. E. Foltz, Eldridge Kretsinger and mother, and Mrs. Olin Knodle with Mrs. Dorothy Hickey at the piano. They sang "Tis so Sweet to Trust", "In Jesus, Shall We Meet", "In the Sweet By and By", and "Meet Me There".

His pall bearers were his grandsons, Earl and Ray, sons of Arthur Schelling, Harry and Roy, sons of Bert Schelling, Olin, son of Frank Schelling, and Lavere, son of Charles Schelling. The deceased was widely known in the vicinity which was evidenced by the large number that gathered to pay their last respects to the aged father.

He was a man of strong convictions, always standing for the good and right things in life. Leaf River has gain lost one of its pillars, both in the church and community. The entire community surely sympathizes with those who mourn the loss of a husband and father. 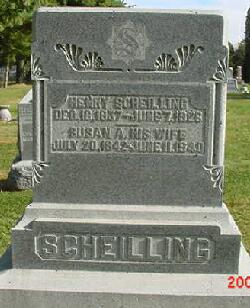