John Miller, seventy-nine years of age, died Friday, June 30 at his home in Forreston. Mr. Miller, who was a native of Germany, resided south of Forreston for nearly fifty years. Two years ago he moved to Forreston. He was known to many in this part of the state as a pipe organ maker, making many small organs used in churches. Mr Miller is survived by four sons, Geo., John and Frank of Forreston and one son living in Iowa and Miss Miller of Forreston. 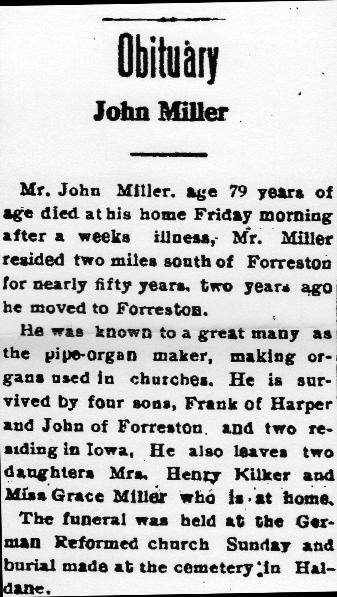 **NOTE: No gravestone can be found in Haldane Cemetery so apparently none was installed or it has been destroyed over the years.

He was known to a great many as the pipe-organ maker, making organs used in churches. He is survived by four sons, Frank of Harper and John of Forreston and two residing in Iowa. He also leaves two daughters Mrs. Henry Kilker and Miss Grace Miller who is at home.

The funeral was held at the German Reformed Church Sunday and burial made at the cemetery in Haldane.