John Light died at his residence in Leaf River Thursday, April 18, shortly after the noon hour after a lingering illness of several weeks duration. He was born in Lebanon Co., PA, July 17, 1812 and had reached the mature age of 88 years, nine months, and one day at his death. The funeral sermon was preached by Elder Isaac Trump of Polo in the U. B. Church Saturday and the interment was made in the Lightsville Cemetery. The career of Mr. Light was great in many ways and his obituary would not be complete without saying something about it.

The first known ancestor of the Light family to locate in the United States was John Peter Light, a native of Germany who came to this country in 1737, locating in Lancaster Co., PA. When quite young, John Light learned the trade of a weaver, which he followed the greater portion of his life in his native state. During the year 1836, in company with ten other families, he emigrated to Ohio. They stopped a short time in that state and then started overland for Illinois, arriving in this county July 15, 1836, after a journey of three weeks and remained with the families while engaged in the carpenter's trade. With some carpenter's tools and a small sum of money, he stopped in what is now Oregon Township and worked at his trade until fall. He then started in company with four others for his home in Pennsylvania.

Two horses constituted their outfit for traveling and they would ride and tie, that is, two would ride two or three miles, then they would dismount, tie their horses and start on afoot, whereupon the other two would come up to where the horses were tied, mount them and ride two or three miles, and dismount and tie. In this manner they reached Ohio, where Mt. Light secured a horse and rode to Maryland where he walked the rest of the way, over one hundred miles to his home in the Keystone state.

In 1837 he again returned to this county and purchased a claim on sections two and four of what is now Leaf River Township. Upon this he erected a log cabin which he rented and boarded with his tenants. As soon as the land came into market from the government it was purchased. During the first year or two while improving the land he worked at the carpenters trade. On March 18, 1845, he was united in marriage with Miss Catherine Schucker, also a native of Pennsylvania. They commenced keeping house in the log cabin on Mr. Light's land. In addition to the cultivation of his land, Mr. Light engaged in the mercantile business, opening the first store in Leaf River Township. It was also about this time that Mr. Light plotted Lightsville. His goods were purchased either at Chicago or Peru, which were largely conveyed across the country by teams. After retiring from the mercantile business he engaged extensively in agricultural pursuits in which he met with more than ordinary success. In 1864 he moved to Stephenson Co. where he had a fine farm and in 1886 he located in the village of Leaf River. Mr. Light was the proprietor of about 1500 acres of land at one time.

Seven children were raised to maturity and two of these died after having families of their own. Both Mr. and Mrs. Light were members of the River Brethren Church. The survivors of Mr. Light are his widow, Mrs. Henry J. Schrader, Martin Light, Mrs. John Panneborg, Henry Light, and Mrs. Riley Motter, and their families, and the widow and children of John and Joseph Light, deceased.

Founded town of Lightsville, about 1 mile north of Leaf River, Ogle Co., IL
Arrived in Illinois July 15, 1836 from Ohio where he stopped after leaving PA.
Purchased his homestead from the government for $1.25 per acre.
He was the second postmaster at Lightsville suceeding Samuel Beeler. The Post Office was called "Wales".
He built the first school in Lightsville at his expense in 1843, it was destroyed by fire in 1938.
Opened a general store in 1844
In 1859 he divided his big timber woods into four and five acre lots which were sold to local residents.
In 1859, the North Grove Circuit, Rock River Annual Conference of the United Brethren in Christ, granted permission for the construction of a church to be built in Lightsville. The church and parsonage were built in 1860 on land donated by John Light.
Was School Director, Road Commisioner, and Road Master for many years.
According to Catherine Schucker Light's obituary they moved from Lightsville to Stephenson Co. in 1864 until 1886 when they moved to Leaf River.
Lightsville Cemetery was established and deeded by the Light family December 7, 1867 to the cemetery trustees.
Ogle Co. History book, published in 1878, says his great grandfather, John Peter Light came from Germany August 30, 1737 settling in Lebanon Co., PA 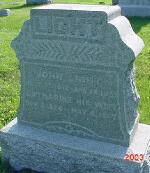