M. J. CRILL, who resides on section 14, Monroe Township, is a well-known farmer and stock raiser, one who is known throughout the length and breadth of the county. He is a native of the township, born August 11, 1848, and is the son of John J. and Margaret Crill, who were married November 7, 1847, and who were num&SHYbered among the early settlers of the county, and who were the parents of three children-M. J., Orlando and Augusta. The. latter married Henry Hardy, and they are now living a retired life in Rockford, Illinois.

The subject of this sketch remained under the parental roof until he was twenty-six years old, and in the common schools of the neighborhood received his education. The greater part of his education, however, was obtained in the school of experience, the lessons of which are usually well im&SHYpressed upon the mind, and seldom forgot&SHYten. From the time old enough to reach the handles of the plow, he was expected to do his full share of the farm work, and whatever he did was well done. The habits of industry acquired in youth have remained with him during life, and his farm is always under a high state of cultivation and well kept in every respect.

Mr. Crill was married January 3. 1871, at Cherry Valley, Illinois, to Amelia Hoodshell, a native of Winnebago County, Illinois, and daughter of Jacob and Nancy (Obedear) Hondeshell, both of whom were natives of Pennsylvania, and who were numbered among the early settlers of Winnebago County. By this union four children were born: Nellie A. married Robert Dresser, a substantial farmer residing at Lindenwood, Illinois, where he operates a farm of one hundred and sixty acres; Maude died at the age of nine years, and Ruth Ella when ten months old; and one died in in&SHYfancy.

When Mr. Crill was first married he commenced farming a tract of five hundred and ten acres of land and made a specialty of raising Percheron and Morgan horses and Shetland ponies, short horn Durham cattle, and white Chester hogs, a branch of his business in which he was quite successful. He has continued to engage in general farm&SHYing and his ability as a farmer is acknowl&SHYedged by all. For three years he served as road commissioner, was twelve years a member of the school board, and for five years bas been one of the constables of his township, an office which he now holds. In politics he is a Republican. Fraternally he is a Mason, a member of the Knights of Pythias and Modern Woodmen of America. 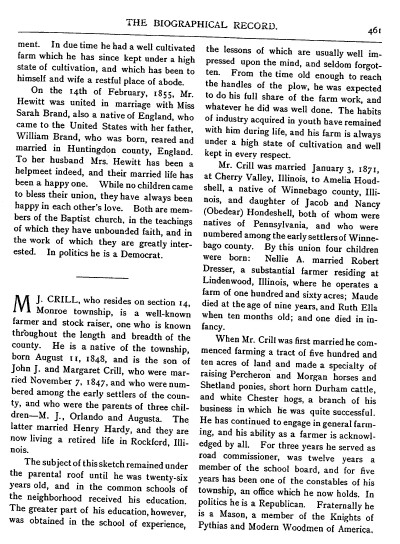