PUTNEY CROWELL-- Among the well to do farmers as well as respected citizens of Marion Township is the subject of this notice, residing on Section 30. He is a native of New Hampshire, born in Hopkinton, Dec. 26, 1834. His father, Jeremiah Crowell, a pioneer of Ogle County of 1847, was born in 1796. He was united in marriage with Miss Betsy Bickford, who was also a native of New Hampshire. After their marriage, they located in Hopkinton, where he followed his trade, that of cooper, in connection with agricultural pursuits, until 1847. During that year he emigrated to this State, coming by rail as far as Albany, N.Y., then by canal from that city to Buffalo, from whence he came via Lake route to Chicago. He then hired a farmer to bring himself and family to this county. Arriving here in 1847, he purchased land on Section 28, Marion Township, on which he located and engaged in his chosen vocation. His purchase had a log cabin on it, and five acres under fence. The family at first moved into a vacant house belonging to his brother Moses T., in which they lived for two years, at which time he sold his land and made another purchase, this time on Section 30, of the same township. This land was wild, unbroken prairie, but he had faith in the future developement of the country and immediately erected a stone house and commenced to improve his land. There he laid the foundation of a competency and lived to see the country rise from its primitive condition to a rich and productive agricultural district, his death occurring on the old homestead, March 1, 1865. His wife survived him until June 8, 1880, when she passed to join him in the land beyond. Of their family of children, eight grew to man and womenhood: ELIZABETH A., is the wife of J. MASTERS and is living in Chicago; ROBERT T., is a resident of Concord, N.H.; SAMUEL B., resides near Storm Lake, Iowa; AURELIA D. is the widow of S. MARSHALL, and is a resident of Mt. Morris Township; A. BURNHAM lives in the "land of gold;" EDWARD W. resides near Storm Lake, Iowa; and FRANK G. is a resident of Chicago. Putney Crowell was 13 years of age when his parents came to this county. He lived and labored in Marion Township, working on the farm and attending the common schools, and there developed into manhood. He continued to make his home with his parents until their death, and at this writing owns and occupies the old homestead. The farm contains 250 acres, all under fence and well improved, and supplied with a good set of buildings. There are two barns, one built in 1870, 60 X 40 feet in dimensions, with a stone basement; the other in 1878, it being 48 X 36 feet in dimensions. Our subject was married on the 8th day of May, 1861, to Mary E. Blakeley. She was born in Marion Township, and is the daughter of Alpheus and Mary E. (Martin) Blakeley, pioneers of this county. Mr. and Mrs. Crowell are the parents of one child: CELESTIA E., the wife of FRANK MUNGER, proprietor of the Rock Island House. As a representative of the agricultural class in Marion Township, our subject certainly has no superior. His success is attributable to energy and perseverance. 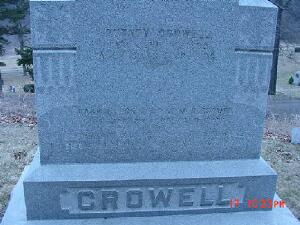