SOLON CROWELL-- Among the pioneers of Ogle County of 1836, who yet live and tell of the trials incident to its early settlement, and who have passed upwards of 50 years in the county, is the subject of this notice. Coming here in the year named, he has been closely identified with the agricultural development of the county, and is to-day living on his fine farm on Section 30, Marion Township, and enjoying the accumulations of the past, respected and honored for his sterling worth and integrity by all who know him. He was born in Grafton Co., N.H., Sept. 12, 1812. His father, Robert Crowell, was a native of Massachusetts, born in Middlesex County, April 23, 1771. The great-grandfather of our subject was Aaron Crowell Sr., a native of England, who emigrated to this country with two other brothers about the year 1750, locating at Medford, Middlesex Co., Mass. There the grandfather Aaron Crowell Jr., lived and died in Massachusetts. He was a seafarer part of his life. The father of Solon, Robert Crowell, early learned the trade of a cooper, having mastered the same previous to the age of 20 years. From Massachusetts he went to New Hampshire, where he engaged in making staves for water casks for the good ship "Constitution." On going to New Hampshire, he located in Hopkinton, Merrimac County, and there carried on the coopering business. In 1811 he removed to Grafton, Grafton County, in the neighborhood of which village he bought a tract of timber land, on which he settled with his family and began to improve the same. Two years later he disposed of his real estate and returned to Hopkinton, where he engaged in working at his trade and continued until 1837. It was during this year that he heard such glowing reports of the rich and productive prairie lands of Illinois, and concluded to come. Consequently, in company with his son, Moses T., he emigrated to this county. Here he took up his abode and labored as an agriculturist until his death, which occurred in September 1862. The maiden name of his wife was Sarah TYLER, who was born in Merrimac County, N.H., March 28, 1774. Of this marriage there were ten children born to brighten the household: JEREMIAH, a pioneer of this county, now deceased; the second child died in infancy; HANNAH was married and lived until her demise in Connecticut; WATTS T., died in Rockvale Township; MOSES is a resident of California; MARY is the relict of John WILSON; he was a resident of Buffalo, N.Y., and died Feb. 8, 1876; SAMUEL P., died in Rockvale Township; SOLON is the subject of this notice; LORENZO died inMarion Township;, and SARAH died in New Hampshire. Solon Crowell was reared in the town of Hopkinston, N.H., attending the publis schools and learning the trade of his father, which he continued to work at until 1836. During this year he started from Hopkinston, May 29, by stage for this State; arriving at Albany, N.Y., he went by rail (the only railroad at that time on the direct route from his native place Mr. Crowell went to Buffalo by canal and then via the lakes to Detroit, Mich. There were seven in the company which started from New Hampshire, and on arrival at Detroit three of them went to Chicago via the lakes, and ther other four, including our subject, started a foot. Reaching Ypsilanti, they found passage to Niles, from whence they went down the river to St. Joseph, thence by lake to what was then the insignificant little village of Chicago, arriving there June 20. Four of the party remained in Chicago. Mr. Crowell, in company with Josiah P. WHIDDEN and Ebenezer EASTMAN, went to Dixon on a lumber wago, paying $ 8 each for the priviledge. From Dixon they walked to Oregon, at which place they remained for two days, when they set out to find themselves a claim. Mr. Crowell selected one in what is now Mt. Morris Township, and the other two gentleman selected claims near by. They joined together and erected a log cabin, where they continued to reside for a while, when one of the party, EASTMAN, took the ague, and becoming discouraged, sold his claim and returned to New Hampshire. The others remained there until the fall of that year, when our subject went to Dixon and engaged in working at his trade. Early in the spring he returned to his claim and hired men to split pails for fencing his property, while he continued at his trade. In 1841, after the land had come into market, our subject entered the claim heretofore referred to, at the land office in Dixon. In the summer of 1842 he sold that tract and moved to what is now Marion Township, locating a new claim on Section 29, 30, 32, and 34, entering 640 acres, and on which he is at present residing. On this latter tract he first built a small frame but since has erected a fine brick residence. His farm is one of the most productive and well arranged, and has upon it all modern inprovements. Mr. Crowell was married in 1841 to Miss Mary MARSHALL, born in Plattsburg, Clinton Co., N.Y., and died Feb. 23, 1843. He was married the second time in Dixon, Ill., April 20, 1851, to Miss Sarah KEARN. She was a native of New York State, being born in Madison County in 1819. She came West in 1836 with her parents. Her father was formerly a carpenter and joiner but later a farmer. They settled for a time in Chicago, afterwards in Kendall County, where the parents both died, the father about 1876, the mother in 1881. Mr. Crowell has nine children by his second marriage, of whom he justly feels proud. In politics, he votes with the Republican party, and has ever since its organization in 1856. He is a social, genial gentleman, whose word is accepted by all who know him, and was never known to turn a deaf ear to true charity. 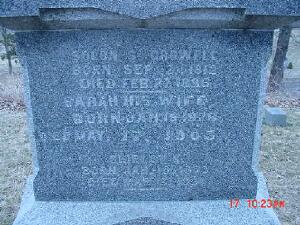