These obituaries are for son Lt. C. N. Woods (he's listed on the monument in the middle of Byron) and his mother Lima who died about a month later. I haven't been able to find an obit for the father Maj William Woods (from the War of 1812) who died about a year later. All came down the rivers from New York to Rockford on a raft around the 1840’s. All are listed in the 1850 Rockford Census and the 1860 Byron Census. I haven't been able to find where they lived in Byron. They are all buried in the Greenwood Cemetery in Rockford with a big family monument.

On Tuesday last the body of another victim to the slaveholders’ rebellion arrived here on the cars. It was the body of Lieut. C. N. Wood, of Company F, 74th Regiment. Thus die the heroes who are sacrificed on the altar of their country, created by the flood of human slavery.

The deceased was one of the first settlers of this County, and mother of the late Lieut. C. N. Woods, of the 74th Illinois Volunteers, whose remains were brought here from Winchester, Tenn. four weeks since. She has left her aged companion and many friends to mourn her loss. We anticipate a re-union in Heaven. 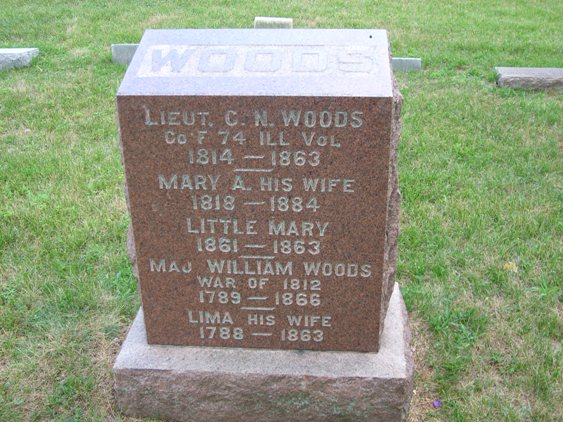