Zenas Aplington, was born December 24, 1815, the seventh child of James and Caty (Dean) Aplington, descendants of the first settlers of Massachusetts. His childhood was spent in Broome and Delaware Counties, New York, and his education was gained in that locality, and in his twenty-second year he left home, reaching Buffalo Grove in 1837. For a time he was employed in the sawmill of Oliver W. Kellogg, and during the next twenty years was engaged as blacksmith, carpenter, sawyer, farmer, railroad contractor, merchant, real-estate dealer, legislator and soldier, as the demand came. He was an early member of the Regular Baptist Church of Dixon and Buffalo Grove, his name appearing in the church records as a member of the Church Council as early as June, 1840. On April 27, 1842, Mr. Aplington was united in marriage with Caroline Elizabeth Nichols, daughter of William and Jane (Look) Nichols, and six children were born to this union, as follows: Harriet C., who married Col. M.D. Swift; Sophia M., who married Josiah P. Scott; Henry of New York City, who married Sophronia P. Webster; John, who married Kate A. Smith; Dr. Burton Z.; and Winneshiek. In 1843, with Timothy Perkins, Mr. Aplington caused to be circulated a petition to the School Commissioner, asking him to prepare and cause to be exposed for sale Section 16 of the school lands of the township, and in 1844 he was elected Township Treasurer, holding that office until he was elected the first Supervisor of Buffalo Grove in 1850, and first Chairman of the Board of Supervisors in that year. He was the second and probably the last, clerk of the "claim committee" organized for the purpose of settling the claims of the "squatters." In 1852 Mr. Aplington secured an eight- mile contract for the construction of the Illinois Central Railroad, and through his influence and the offer a part of his farm to the company, induced it to locate the road and the town of Polo where it now is. He laid the foundation for the first brick building in Polo in 1853, where his business was carried on, and his interests grew phenomenally, although during the depression of 1857, with nearly everybody else, he was affected. In June 1857, he was a stockholder in the first Republican newspaper started in the town, and during the same year with Elisha Doty and James Brand Sr., erected a stone flouring mill, which, however, proved a failure. He was one of the first trustees of Fairmount Cemetery; was President of the Buffalo Bible Society; a member of the Young Men's Association-a Library Association; was President in 1859 of the Templars' Alliance, and a member of the Good Templars' and Masonic fraternities. He was a President of the Board of Trustees of the Town of Polo in 1857, and was a leader in a movement for the establishment of a township graded and high school in October 1859. A leader in the political affairs of the Republican party from the time of its organization, Mr. Aplington in 1858 was a successful candidate for State Senator, being unanimously nominated to this office at Rockford, September 22, by the Republican Senatorial Convention of the Third District, and while serving in the Legislature, was a member of the Senate Committee which investigated the celebrated canal scrip frauds from which the State finally recovered $ 238,000 on property turned over by Ex-Governor Matteson. On February 9, 1860, Mr. Aplington was elected President of the Republican Club of Polo. From the days when Sumter was fired upon and Lincoln's first call for volunteers was issued, Senator Aplington devoted much time to promoting enlistments of volunteers, and in the summer of 1861, he himself enlisted in what became Company B, Seventh Illinois Cavalry, was commissioned Captain of the company on August 11th, and November 13th was promoted to Major. A considerable portion of his company was made up of his old friends and neighbors in the country adjacent to Polo. Following the enlistment, came the winter of miserable weather at Bird's Point, and a time of inaction. Then followed the active campaign of March and April at New Madrid and Island No. 10, this campaign ending for Major Aplington in his death, on the 8th of May, near Corinth, Mississippi an account of which, taken from a letter by William R. Waterbury, of Company B, Seventh Cavalry, and published in the "Polo Advertiser" on August 14, 1862, being here presented:

"On the 14th day of May the Third Battalion of the Seventh Cavalry, under Major Aplington, left camp to form the advance guard of General Pope's Division, then camping near Farmington, Tennessee. Nothing too place until the 8th save skirmishing between pickets. About 10 o'clock p.m., two companies of Major Aplington's command, consisting of F and M, the former under C.F. Lee and the latter under Lieutenant Johnston, were ordered to advance so as to draw the enemy's fire. Ten men were ordered to advance as skirmishers, and after advancing within two miles of Corinth they were fired into by the rebels, and the remaining portion of the two companies came to their support, driving the rebels from their position and holding the same until Major Aplington received orders to charge with one platoon , consisting of twenty men. They charged about eighty rods, followed closely by the balance of the remaining two companies.

The enemy's pickets were being re-enforced, it was thought advisable not to proceed further with so small a force, and the Major ordered a halt. Shortly after which, General Paine sent a messenger, ordering the Major to drive the rebels from the woods, which he hesitated to do until a second order came for him to advance, or he would be put under arrest and his command sent to the rear in disgrace. Lieutenant Lee was ordered to advance with the first platoon, which he did about a quarter of a mile then being fired into he dismounted his men and moved as skirmishers. Driving the rebels back slowly about a quarter of a mile, until they were in sight of a rebel battery and a strong line of infantry. At this time the Major came up at the head of the other three platoons, but they were checked by a heavy musketry fire, and the Major ordered a halt. At that instant he fell from his horse, a ball penetrating beneath his right eye. Thus ended the life of a good man and an efficient officer; one whose loss is greatly regretted among the men and officers of this regiment." 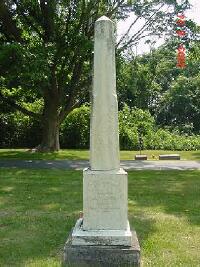 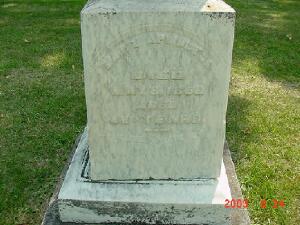